You are here: Home › The Ministry of Gender, Children & Social Affairs with Support from Jembi/UEM-Moasis present the latest developments of the New National M&E System (SI-M&A) at Meeting of Partners
By MOASIS on February 24, 2017 in Announcements, News, Press Releases

The Ministry of Gender, Children and Social Affairs (MGCAS) convened a meeting of partners to presentthe latest developments and way forward for the new national M&E system, SI-M&A developed and implemented nationally by Jembi/UEM-Moasis with USAID resources. 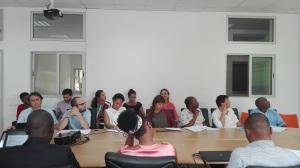 MGCAS, INAS staff, and partners at the Partners Meeting on Information Systems

Maputo, Mozambique – February 2016 – The objective of the partners meeting convened by the MGCAS was to present the latest developments of the new national M&E system as a base to better coordinate activities related to the information system. The meeting was led by the Director of the National Directorate of Planning and Cooperation (DPC) and attended by DPC, National Institution of Social Action (INAS) staff and several partners, including DFID, UNICEF and representatives of the Embassies of Sweden and Switzerland. Jembi/UEM-Moasis, is the MGCAS technical partner and responsible for the development and implementation of the M&E system.

The joint MGCAS and Jembi/UEM-Moasis project and new system was presented to the
partners and the group discussed issues revolving related with the system, including
functionality, forms, data security, and interoperability with other subsystems and systems
from other sectors and data that is not yet being captured by the system such as data on
premature weddings. The meeting was deemed to be productive by the partners and the
national institutions present from an information sharing standpoint.

View all posts by MOASIS →